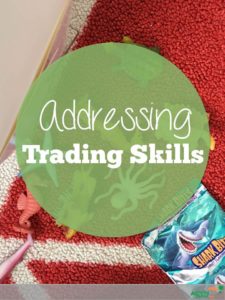 Have you watched kids interacting in real life? They are in a constant state of negotiation. They make deals about who will go first, who gets to be which role, who does which chore. They trade snacks, lunches, cards and little treasures.

And it requires a lot of social acumen and language ability—two areas our kids are often lacking in. It’s a good thing to work on so that they aren’t taken advantage of, but also so they don’t bully their way into getting what they want either.

This year I bought a big bag of plastic sea creature figures and divided them into little take out containers as end-of-the-year gifts.  During our last session, I let the kids open their box, look over their miniatures and trade with others in the group.

One of my students who struggles with social skills is seen in an articulation group.  He took one look inside his box and said “I’m good,” closed it back up and effectively closed the conversation.  It wasn’t because he had every creature he wanted, it was because experience had taught him that he’d be likely to get the short end of the stick in a negotiation.

You can simply have students trade and support appropriate requests/responses or you can explicitly teach what a negotiation is.

Want to set up practice scenarios?

Want to save this post? Pin the image below! 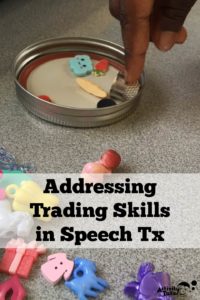 Today is the final SLP Must Have Sale for the 2018-19 school year! Head to TPT and search #Jun2018SLPMustHave for a listing of all products that are 50% off. You’ll find my popular Articulation Paper Chains that can be used year round and have both single word picture prompts or sentences.

« I Keep Repeating Myself
Attendance and Data Collection 2018-19 FREEBIE »