Home » I’ve Been to Jail and I Liked It

I’ve Been to Jail and I Liked It 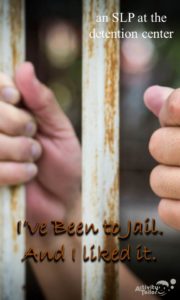 I’ve been to jail and can honestly say I really liked it. In fact, I went there so many times, I was on a first-name basis with the officers on duty.  I guess I should clarify and say I worked as the school SLP and provided speech therapy for juveniles up to age 18 in the detention center who were diagnosed with speech impairments while serving their sentences. The County Residential Center (CRC) was in the school district where I worked and I was fortunate to be the serving SLP for that facility.

I do say fortunate because it was an opportunity that not many are given nor would probably desire. It was a unique experience because I was obligated to abide by both the rules of the school district and the federal rules for the facility.  This meant that the rules of the facility often trumped the school district rules and often negotiation was required to provide therapy.

The first time I was assigned to see a student at the CRC, I didn’t realize exactly where I was going to be providing speech therapy and my naiveté shined through when I asked my special education lead teacher, “What time do the students arrive for school?” He looked incredulously at me, and then a hint of a smile curled at his mouth as he politely explained that students were actual inmates and never left the facility.  They would be wearing the requisite orange jumpsuits. He then politely informed me I could arrive as early as 8:00 a.m.

This was a true juvenile detention center. Students never left and stayed in pods with no more than 12 inmates per pod. They attended school during the day but were not allowed any form of technology. Many class options were not available due to the constraints of the facility (i.e. computer classes, choir, theater).  I was never privy to the reasons why the students were there unless they chose to divulge the information to me personally.  Students who were seen by me were in the “long-term” side, meaning they had been sentenced and could be there up to a year. I would follow the guidelines mandated on their IEP while following the rules of the facility.  For example, if an inmate had misbehaved and was on ‘lockdown’, I was not allowed to see the kiddo even though it was mandated on the IEP.  There were several instances when this occurred.

Upon arrival, I showed my school badge to the receiving officer and announced who I was there to see. The officer pushed a button to allow me entrance into one of the two small holding rooms consisting of a table and two chairs positioned in front of a huge window to the control room. This was where the inmates met with their probation officers, counselors, and other personnel.  I was required to leave my purse in the hallway and was not allowed to bring any technology into the therapy room. The officer escorted the student into the room and we were locked in.

I saw many students there over the next five years and several had significant communication disorders.  One student had been diagnosed with apraxia from his school district.  He had no memory of having ever received speech therapy. The officers and other inmates were always struggling to understand him and he was frequently teased by the other inmates.  After a few session, I requested special permission from the head officer to bring in a mirror (which was thoroughly inspected to ensure it couldn’t be broken and used as a weapon) as well as a recording device for performance feedback.  Any materials I brought in were inspected to deem safe for use with the students.

After working with this student on a weekly basis for a few months, the officers began to tell me how much his overall intelligibility had improved and that he was no longer afraid to speak out during class or talk with others. The officers got on board with his progress and helped him practice if I provided materials. Again, everything had to be approved.  Even staples in worksheets were forbidden. Eventually, this student was released and returned to his home school. Though I lost contact, I was pleased with the remarkable progress he made under my treatment.

Another student had a significant articulation disorder and was teased mercilessly for having an “accent” by other inmates.  The officers reported that they weren’t able to understand him and he frequently had to repeat himself.  He was so motivated to improve his speech that he practiced all the time. He literally held his head higher the more his articulation improved.  By the time he had served his time at the CRC, his articulation was almost completely remediated and everyone could understand him. He assured me, I would never see him in that facility again.

There was a young lady I had formed a relationship with who was a repeat offender. She served her time and was released, then returned within three months.  During one of our sessions, she admitted that she felt like she belonged at the CRC with the officers who were more like her family than her real family.  It was so heart wrenching to hear someone wanting love and attention by officers rather than family.  I never did find out what had become of her, but I know she turned 18 and was considered a legal adult. While she was served at CRC, she had completed her coursework early for graduation and expressed a desire to attend college.

Many people asked if I was ever afraid to go to jail to work with the students or if I felt my safety was ever in jeopardy. Many thought I was completely insane to even want to go or interact with them.  I found that the students were very motivated to work during their time with me. What occurred in my speech sessions stayed within those walls and my students learned quickly they could speak their minds safely.  My students made great gains with their overall communication skills and having someone pay attention to them and actually care for them was paramount to their success. I felt I was able to provide that for them. In return, they worked hard for me, entrusted me with their confidence, and willingly completed the homework given to them.

I no longer work for the school district so I’m not able to go to the CRC anymore. I do think that if I could work full-time in that facility, I wouldn’t hesitate. My answer would be a resounding YES!!

Reminder!  You have until this Friday, October 16, 2015 to sign your students up for pen pals! Click here for all the details.

Come talk to me! From a toddler or preschooler saying their first word toddlers to elementary-aged children using language to play and make friends, there is such magic to communication that I never get enough of it! Over 20 years of experience and training has brought me to the top of my field, and ready to share *all* of the tips and tricks I learned along the way!
All Posts »
PrevPreviousThink Board
NextHalloween Fun Sequencing FREEBIE!Next