Fairy Tales in Speech Part 3: Goldilocks, Little Red and Jack and the Beanstalk 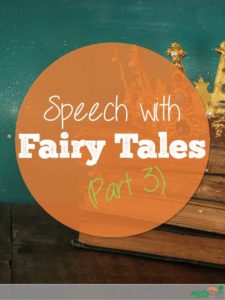 In my previous two posts I talked about why I like to use fairy tales in speech and then the specific targets I’ve been working on and how I used Hansel and Gretel and The Three Little Pigs to support these goals.

Today, I’m sharing ideas I used with Goldilocks and the Three Bears, Jack and the Beanstalk and Little Red Riding Hood.  Let’s get started!

As a quick recap, the primary goals I needed to address were:

I always start the session with the story itself (for tips on how this is done, click here.)

Once the story is over, it’s their turn to tell me the story. Depending on the age and ability of the student I tailor my expectations.  Retelling might look like: 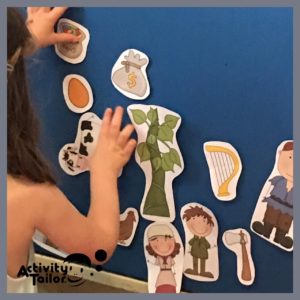 For Jack and the Beanstalk, I had characters that I printed and attached magnets to (or print directly onto magnet sheets).  I liked these manipulatives for this story because it allowed us to maintain the perspective of the stalk climbing high, much higher than Jack and his mother’s house and that the giant lived among the clouds. 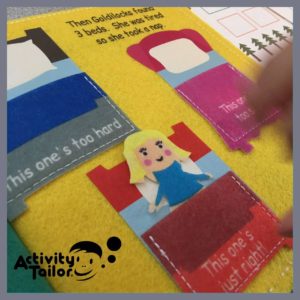 Little Red and Goldilocks we acted out with finger puppets. Target had a felt book version of Goldilocks in the Dollar Spot this summer so I had that too. 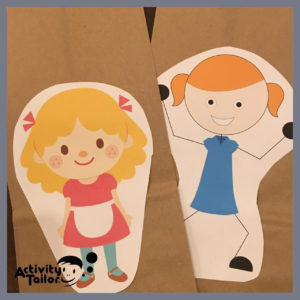 For pronouns, I had a stack of little action cards with a consistent female character.  We’d label the action (she skips, she dances) and put them in the Goldilocks bag.  We had another activity where we sorted and labelled different sized objects—small bowl for baby bear, big bowl for baby bear, but had a few “Goldilocks” cards which meant she could take one of the objects for herself!  For this activity, the kids were also placing sorted objects into paper bags and I deliberately had Goldilocks look different.  We can handle that because we have flexible minds! 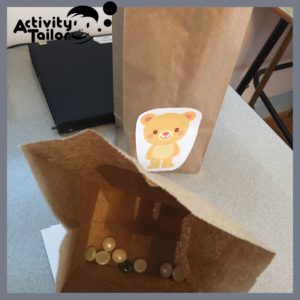 (Quick tip: Add a few flat marbles or stones to the bottom of paper bags to make sure they stay upright.) 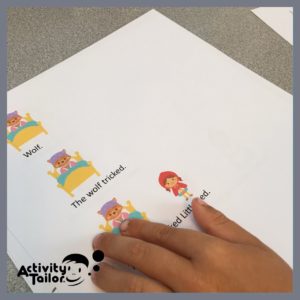 I have several little ones that are pretty intelligible when they’re at the single word or short phrase level, but really hard to understand in conversation. For these guys, I’ve been using some scaffold stories.  They’re very simplistic and each page has increasingly longer sentences.  I’ve noticed that practicing this way (especially when focusing on rate and prosody too) makes a difference in how quickly they are improving in their overall intelligibility. 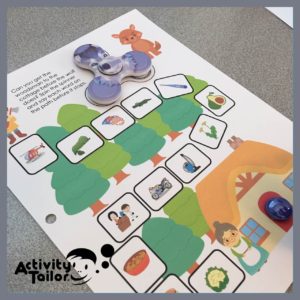 I also capitalized on the fidget spinner craze and created a multisyllabic path through the woods that had to be completed before the wolf spinner stopped.  This was a huge hit!  (What I like about this is that the timed aspect created excitement and real world tension, but they were all able to easily complete the path—those spinners go forever!—so no one got bent out of shape.) 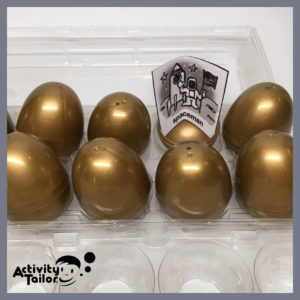 Re-purposing plastic Easter eggs (in gold of course), let us have a classic artic egg hunt–in July no less!

Subscribers! You’ll receive copies of my scaffold stories this weekend in your newsletter. Not a subscriber yet? Click here to join the fun!

Come talk to me! From a toddler or preschooler saying their first word toddlers to elementary-aged children using language to play and make friends, there is such magic to communication that I never get enough of it! Over 20 years of experience and training has brought me to the top of my field, and ready to share *all* of the tips and tricks I learned along the way!
All Posts »
PrevPreviousFairy Tales in Speech Part 2: Hansel & Gretel and The Three Little Pigs
NextEliciting K and GNext