Home » A Quantity of Snowflakes

A Quantity of Snowflakes 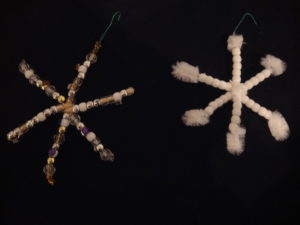 The winters in North Carolina are generally pretty mild.  We can expect to see snow a couple of times, but it seldom lasts for more than a day or two.  I grew up in the Northeast, so for me it’s fun.  There will be a prediction of a few inches and we all hustle to the store and stock up on a week’s worth of supplies.  If we do get flakes, everything immediately shuts down and there is no expectation that you would venture out on the roads.  We sled and make snowmen until our yard is fairly green again and all the snow is captured in the three large balls.  The next morning, the sky is bound to be blue and sunny and we can all go back to the usual routine.

Whether or not you live in a cold climate, you can bring a bit of winter into your therapy room and work on some quantity concepts too.

3 pipe cleaners (per snowflake) in a snowy color 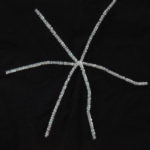 You can now slide pony beads on each spoke of the star.  When you are done, fold the extra pipe cleaner edge over a couple of times to keep the beads on. 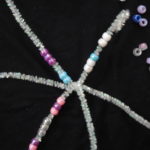 To use in therapy:

Place a pile of beads in front of your student.  The number will depend on their particular needs.  Try some of the following directions:

“Put some beads on the snowflake and give the rest to me.”

“Take two white beads and all of the silver beads.”

“Put a few beads on an empty spoke.”

“Move a couple beads to a different spoke.”

“Take all the blue beads and none of the white ones.”

“Use four white beads and fewer silver ones.”

“Place more than two purple beads on the flake.”

“Use several of the gold beads.”

“Put most of the beads on the snowflake.”

Need something for articulation instead?  Try this,

Articulation:  You have a couple of options.  You can use beads as counters for each correct production and either have the kids slide them on while you work with another student or take a break every few minutes to have them slide on their stash if you are working with a child individually.  The activity also lends itself well to a carryover activity for “s” blends—snow, snowflake, slide, sparkle, star, spoke (of the wheel/star), slip, ski, skate, sky, sled, snowdrift.

The kids here say that wearing your pajamas inside out and backwards and sleeping with a spoon under your pillow virtually guarantees snow.  Anyone else have a snow day superstition?  We haven’t had a flake yet, so we’re all ears!

Come talk to me! From a toddler or preschooler saying their first word toddlers to elementary-aged children using language to play and make friends, there is such magic to communication that I never get enough of it! Over 20 years of experience and training has brought me to the top of my field, and ready to share *all* of the tips and tricks I learned along the way!
All Posts »
PrevPreviousA Burst of Therapy
NextIt’s Not You, It’s Me (Staying motivated in January)Next