Home » What counts as a first word?

What counts as a first word? 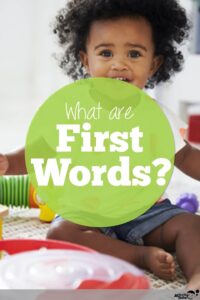 Parents are often surprised (and relieved) at our first meeting when I let them know that a lot of the communication their child is attempting does count as a first word.

What counts as a first word?

A word is any consistent, and generally unique label, for a specific object, person, action, etc.

Here are a few things that count:

Exclamations: These are some of the first words little ones pick up because they are usually said with a lot of emphasis and intonation. These include “uh-oh” and “ow!”

Environmental and animal sounds: Calling the cow a “moo” is perfectly acceptable. Using “beep-beep” for the car is too.

Signs: Whether your family correctly uses baby signs or you’ve got a couple “family” signs you all use doesn’t matter. As long as your little one is using the sign/gesture consistently and it always indicates the same thing, it counts as a word.

Vocal approximations: It takes a long time before a child’s speech become clear and we aren’t here to judge! Shortened or simplified words are common to start. This is where a lot of family nicknames come from!

Usually, children will start saying “mama” and “dada” because it’s an easier string of sounds and because we react so enthusiastically to the attempt! In this situation, one could argue that the child says the word and we start adding the meaning for them.

Most often the first true word will be the name of a preferred object or person that the child sees frequently. In my house, the first words we heard were “ball” and “doggy.” Other common first words are: hi, bye, car, and baby.

You can expect to hear your child say their first word by their first birthday and most children will have two to six words by then.

Early intervention can make a big difference for children who aren’t meeting speech and language milestones. Check out this post for more info.

What doesn’t count as a first word?

When a child says a recognizable word, like “more,” but uses it almost indiscriminately then it doesn’t count as a first word. For example, if your child signs “more” because they are hungry, and then “more” when they want to continue an activity or to stay, and then again when they want something, but you aren’t really sure what they want that isn’t a word. What they’ve learned is a signal to get you to start guessing (which does have communicative value!), but they haven’t attached specific meaning to that specific word.

Are you eagerly waiting to hear that first word and feel like your little one needs some support? Try Intentionally Parenting Late Talkers! This workbook will take you step by step through the tips pediatric speech therapists use to get little ones talking.

Come talk to me! From a toddler or preschooler saying their first word toddlers to elementary-aged children using language to play and make friends, there is such magic to communication that I never get enough of it! Over 20 years of experience and training has brought me to the top of my field, and ready to share *all* of the tips and tricks I learned along the way!
All Posts »
PrevPreviousThe BEST ways to use ice cream in language therapy!
NextFeed Me Games for Speech TherapyNext

There are so many reasons to start a read aloud ha

SLPs, do you skip books during therapy because the