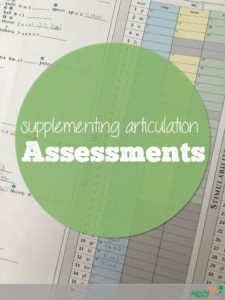 Here we go again. The Kindergarten/1st grade screening letters are sent out and I’ll soon have several blurred days of kiddos and that constant, “did I ask you this already?” feeling.

And the artic assessments are right behind them, since those are the referrals I always seem to get first.

I assess with the Goldman-Fristoe. The second edition. I know, I know. I need to update, but the online discussions with other therapists about the time increase and the large discrepancy in scores has kept me wary. (I am planning to attend a one hour session at ASHA done by Pearson, so there’s a strong likelihood I’ll convert soon. I want to.)

The GF-2, as we all know, is a quick to administer and score test and generally I feel like the scores are a fairly accurate representation of what I’m hearing. Not always, but usually.

The tough situations are the kiddos with an atrocious production of a frequently used phoneme (/r/ anyone?), that don’t look too bad score-wise, but are really hard to understand in conversation. The kiddos that really kill me are the ones that miraculously have “rabbit” but no /r/ anywhere else. Not even a hint of one. Am I the only one this has happened to?

To capture this scenario, I started calculating a “percent consonant correct” (PCC) and including it in my reports several years ago. If you aren’t familiar with the term it means exactly what it says—how many consonants are produced correctly as a percentage of the total produced. Typically this is calculated from a 10-15 minute conversation.

But who has time to gather and then transcribe a language sample?  A 10-15 minute sample, depending on the kid, could be anywhere from 2 to a million words. And it’s not unlikely that there will be several words within the sample that I have no idea what they are. They are coming for intelligibility issues after all. 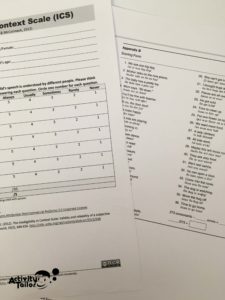 So I was delighted, really delighted, when I came across an article in the American Journal of Speech-Language Pathology, “An Objective and Time-Efficient Method for Determiningh Severity of Childhood Speech Delay” by Johnson, Weston and Bain (Vol. 13, February 2004, pgs. 55-65). I can’t link to the article directly, but you can find it on asha.org. Click under “Publications” and then on the appropriate journal. It will ask you to login with your ASHA account.

Stick with me, don’t let “journal” scare you off.

Without getting into all the particulars, let me just say that the authors made a case for using 36 imitative sentences (more efficient, more control over the variety of phonemic context) over spontaneous conversation. Well, hallelujah! This I can do!

This extra assessment piece takes just a couple of moments to complete and the phonetic transcriptions are already provided so you are simply crossing off the errored consonants. Tally the number of errors, subtract from the total consonants (273) and divide by 273 to get the PCC. Easy as can be.

Assuming the child is old enough that all or most speech sounds would typically be in place, generally scores down to 85% are considered mild; scores between 65-85% mild-moderate; 50-65% moderate-severe; below 50% severe.

The list of sentences and their transcriptions are Appendix B in the article and easily photocopied for administration. I also like using this as a comparison of intelligibility over time and it would work with adults as well as children.

Calculating the score for this is simply an average and by the time a child is 4-5 years of age you would expect the percentage to fall in the usually to always category (the mean was a score of 4.4).

The scale has been translated into lots of different languages and can also be adapted to use with adults. To check it out, click here. I think this is going to add another component that makes my reports more comprehensive.

So what are you up to? Anyone else feel the wave of articulation referrals cresting just beyond them? Any additional tips you have to share or an opinion on the new G-F?

Come talk to me! From a toddler or preschooler saying their first word toddlers to elementary-aged children using language to play and make friends, there is such magic to communication that I never get enough of it! Over 20 years of experience and training has brought me to the top of my field, and ready to share *all* of the tips and tricks I learned along the way!
All Posts »
PrevPreviousAlphabet Sequencing Freebie
NextDefense! Preventing Vocal Overuse in Sports (includes a freebie!)Next