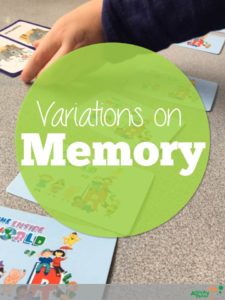 “I remember,
A time I knew what happiness was
Let the memory live again.”

Ah, Memory games. That therapy room staple that you grab in a moment of desperation and activity that appears on nearly every articulation app. It was like the greatest, most inspired idea when you started using it in the clinic, right?

Who’s secretly sick of it?

That’s a lot of raised hands. Mine included.

It’s time for some alterations.

Let’s start with the beginners.

Young ones or older ones that can’t handle a big memory load (‘cause let’s be honest, seldom are we targeting the memory aspect really) or a wide visual array are going to need some adaptations.  Try these: 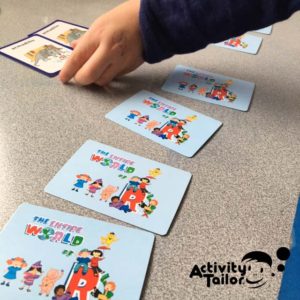 Make two identical decks and only lay one of the decks face down.  Now, have your kiddo draw the top card from the other deck and flip ones from the array until they get a match.

Let’s make it slightly harder by laying out two rows—each with all of the cards (I usually only have 5-7 pairs when I play this way).  Have kiddos start with a card from the top row, and see if they can find the match in the bottom row. 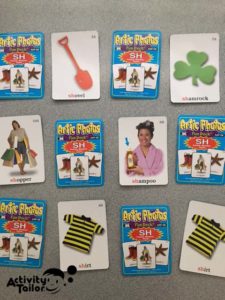 In a bit of a rush or have a kiddo easily upset with the memory component? Get rid of it!  Place the cards in a large array and have them flip over every other card (or every third card).  Once you have those flipped, collect the matches.  Repeat. Collect. Repeat.

Got some older kids that think Memory isn’t enough of a challenge? Shake them up with a red herring or two.  Add at least one or two cards that don’t have a match (if I were doing this with a regular card deck, I’d use a joker, but you’ll find a funny one you can add—like the “gorilla” from your /g/ or /l/ decks.) Play as usual, but if you flip the “surprise” card—oof! You lose one of your pairs.  Your choice as to whether the surprise card happens once or stays in the game.

Or tell them that any two cards can go together as long as they can give you a sentence with both. Or maybe you want them to give you a reason they two cards could be related?  (ex. “‘Cow’ and ‘kangaroo’ are both animals.”)  Up to you.  Be prepared for some pretty kooky answers, especially as you get down to the last few!

Come talk to me! From a toddler or preschooler saying their first word toddlers to elementary-aged children using language to play and make friends, there is such magic to communication that I never get enough of it! Over 20 years of experience and training has brought me to the top of my field, and ready to share *all* of the tips and tricks I learned along the way!
All Posts »
PrevPreviousGo Sequencing App Review and Giveaway!
NextOvercoming Public Speaking Fears by Hugging the MonsterNext