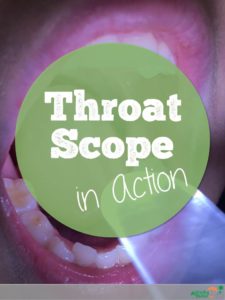 I need to come clean here. I don’t do a lot of oral mech exams. I’ll do a cursory look at how the tongue is moving and see if the can modify the movement with some verbal cues during an assessment, but I’m hesitant to alienate a child I might start seeing for therapy during their assessment by holding their tongue down with a tongue depressor and really getting in there. (And I would never try for a gag reflex! Not with my population who would be much more likely to throw-up on me than give me any neurological insight.)

I do pull out Dum-Dum, flavored tongue depressors and the occasional toothette to help kiddos see or feel where I’m asking them to position their lips/tongues, but…..now I’ve got an even better trick up my sleeve.

The main problem is that it’s so hard to see what’s actually going on in there. I always feel vaguely like I’m spelunking. Which is why I was so keen to try out Throat Scope after I’d seen several photos in my social media feed over the summer and heard all the positive feedback.

It’s justified. My little ones were so excited about the Throat Scope (which is definitely not what I call it in the speech room–speech light saber is (ironically) much less ominous sounding) and looking in their mouths and looking at all the stuff in there.  All of the sudden they were attending to their tongue position, seeing and feeling what I was asking them to do. Much, much easier!

Everyone seemed to find the plastic, even though it’s unflavored, much more palatable than wood tongue depressors. 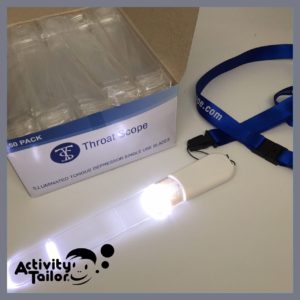 Here’s how it works.  You have a handle with the light inside that you use each time. You buy a box of clear, plastic, disposable depressors that simply slide on to the end (pushing down the toggle and turning the light on). When you’re done, just toss the clear plastic part.

Except most of the kiddos I tried this with begged to keep their “saber” even though they wouldn’t be able to make it illuminate their light. I even had a couple kids bring the saber back to our next session!

For more information, head to the Throat Scope website here.