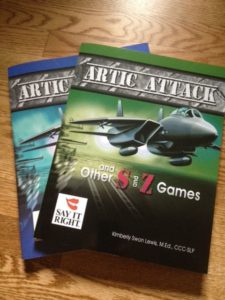 A few years ago, I authored two books with Say It Right, and they continue to contain activities I use with great frequency in my own practice.  The impetus was a number of “inherited” school aged artic kids with persistent error patterns.  Of course, we’re talking /r/ and /s/ here.  I began creating fun games we could play in therapy sessions, but that I could send home for practice as well with assurances it would be done.  What I came up with were classic pencil and paper games requiring minimal instruction that would get me a high number of trials.  Games sheets could be used multiple times with the same student.

I also wanted to have very specific phonetic environments.  I was frustrated by speech games that, at the very best, addressed target position, but contained words that were inappropriate.  If a student working on /r/ isn’t even close on “haircut,” am I really going to practice “world” and call them all medial /r/?  And lumping those phonemic contexts together really makes data collection inaccurate!

Artic Attack and Other R Games and Artic Attack and Other S/Z Games provide four different games for each target.  “R Games” includes all vocalic /r/s in all positions, plus each individual blend (another pet peeve).  “S Games” starts with final /ts/, works through initial, medial and final position of each /s/ and /z/ and includes each individual initial and final blend.  A bonus activity, Hall Pass, is included for each target and there is a letter to caregivers to encourage homework participation.

Instructions to receive a .pdf copy for easy printing is contained in each book. 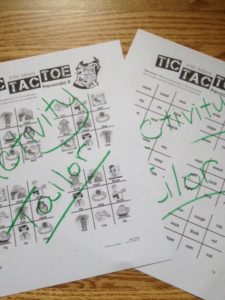 This is one you’ve probably cobbled together yourself at one time or another.  Played like the classic, the only change is that you will say the word as you mark your space (or say “I take ‘(word)’”, etc.  Full suggestions for eliciting carrier phrases or sentences are included).  Each articulation target has two different written word prompt pages, plus one page with picture prompts. 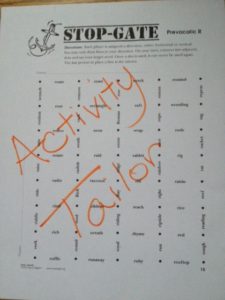 At a glance, this looks like “squares,” and it could be used that way, but it’s actually played a slightly differenly.  Each player is assigned a direction, horizontal or vertical.  On your turn you connect two adjacent dots, saying the target word you cross out.  Once a dot is used, it can’t be used again.  The last person to draw a line is the winner.

Similar to “Battleship,” this version has you using target words to express coordinates.  This is great for moving into phrases and particularly engaging for slightly older students (2nd/3rd grade and up). 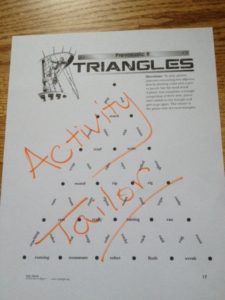 Take turns connecting dots and saying the target word.  If you complete a triangle, put your initials inside of it and go again.  The winner has the most triangles at the end of the game. 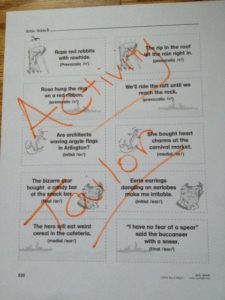 This is a bonus activity to help you during “travel time” and aid with carry-over.  Target-rich sentences are printed on “tickets” which the child practices as you go to and from the classroom.  Consider using a hole punch to track successful trials (just like a train conductor collecting tickets)!

Each book is currently 15% off in my TPT store, through June 9, 2013.  Click the title for more information.

Artic Attack and other R Games

Artic Attack and other S/Z Games

Come talk to me! From a toddler or preschooler saying their first word toddlers to elementary-aged children using language to play and make friends, there is such magic to communication that I never get enough of it! Over 20 years of experience and training has brought me to the top of my field, and ready to share *all* of the tips and tricks I learned along the way!
All Posts »
PrevPreviousFREEBIE: Speech on the Beach (Summer Activities for Artic Practice at Home)
NextHigh Frequency Word List for Articulation TherapyNext