I spent a good deal of this winter feeling very cooped up, and clearly so did a number of my students.  What a bunch of wigglers!  Now that the weather is finally improving, and I’m thinking about needing to get back into shorts myself, I’m looking to incorporate more movement and even some outside time into therapy!

1, 2, 3 Action! decks are designed to target listening and following directions skills and give the option of one, two or three step directions with body movements. 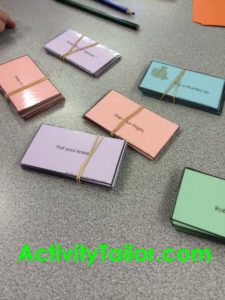 30 card deck with actions that can be completed while sitting on the floor.  (These include more fine motor movements.)

10 card deck with actions that can be completed while sitting in a chair or on a bench.

30 card deck with actions that are completed standing up when there’s room to move!  (These are focused on gross motor movements.)

10 blank cards to create your own action commands.

Each card contains one command and decks can be combined in any way. 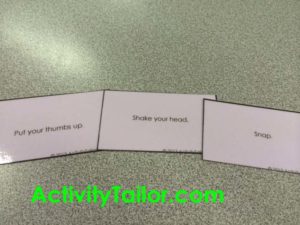 The instructions give eight different games you can play and the cards are flexibile enough that you can create lots of different games.  At their basis though, you would print, laminate and cut out the decks you need, making multiple copies depending on how many steps you want in your commands.  For example, to target three step commands, I would stack three decks face down and have a child turn over one action from each deck, read them and then perform them.  (I’d remove the visual prompt after it was read.) 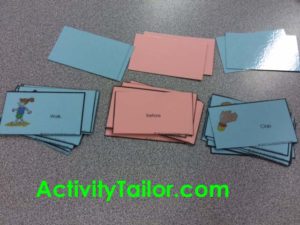 I might have only two action decks separated by a deck of before/after cards to target temporal concepts. 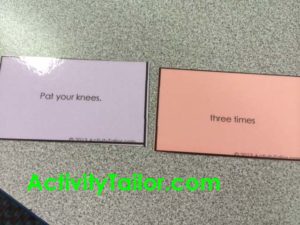 Or I might use one or two commands with the addition of a quantity card.

Come talk to me! From a toddler or preschooler saying their first word toddlers to elementary-aged children using language to play and make friends, there is such magic to communication that I never get enough of it! Over 20 years of experience and training has brought me to the top of my field, and ready to share *all* of the tips and tricks I learned along the way!
All Posts »
PrevPreviousCrack the Books iBooks Series
NextiName It (Household items): Review and Giveaway!Next