Teaching pronouns in speech therapy will always be a frequent goal because so many children confuse subject pronouns like “she” with “her.” 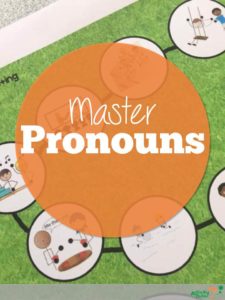 There’s something so sweet about this early stage of language when tots are making their needs abundantly clear, but are still grappling with all of the complexities of grammatical rules.

I spend a great deal of time working on word structure, especially pronouns and verb tenses because these early language milestones can be tough ones for our language delayed kiddos, requiring slow, incremental changes in difficulty and lots of repetition.

Typically developing children will usually begin using subject pronouns like she/he/they/it appropriately around age two. My language delayed kiddos may take longer than this before any pronouns appear at all or may experience a longer period of confusion between which pronoun to use.

The confusion is not about gender. Though they may call all people, “he,” they usually do recognize the difference between girls, boys and, for that matter, inanimate objects (from time to time I’ll get the child who seems really attached to “it.”)

Most often the children I see have difficulty in using the correct form of the pronoun. Usually it’s with object pronouns (me, him, her) taking the place of subject pronouns (I, he, she).

It sounds like this, “Him sit next to me.”

To ensure perfect (or as close as I can get) practice, I start with only one pronoun at a time and aim for mastery. 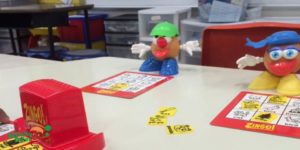 Begin with play and concrete objects.

Set up a “person” with a clearly identifiable gender, meaning the child has made the determination of girl or boy. Though using gender stereotypes always gives me pause, you’re kinda stuck here and, unfortunately, my little ones are very clear about what is “boy” and what is “girl.” (I have several boys that won’t touch the pink or purple crayons. No. Matter. What. sigh.) 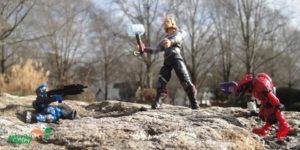 In my therapy room, Mr. Potato Head is often our macho man. Superheroes are also clear about their gender—Spiderman, Iron Man, Batman.  Goodness, those guys insist on it being part of their name! We invite our male friends to sort cars or have lunch with us. The actual activity doesn’t matter, just that you have plenty of items to share. I’ll begin modelling,

Once the child is consistently using the correct form, we move to “she,” removing the “he” representative before we start. Not until the child has mastered each in isolation, will I consider using both a male and female character at the same time.

Using “I” rather than “me” often takes quite a while for my kiddos to get, both in the therapy room and especially in carry-over to regular conversation. You will need to make a determination as to whether you want to address this first, or if it makes more sense to wait until he/she are more stable in their repertoire.

I like to set up activities which require lots of requesting, “I want a block” or “I want more.”  What it is hardly matters. It’s the repetitive sentence structure that I’m looking for!

Once they are consistently using he/she/I in structured play scenarios, we move to picture prompts and I go back to focusing on one gender/subject pronoun at a time before offering them a mixed choice.

I use simple game boards with picture actions for this and you can download your own free set here.

The provided game boards have one each for “he” and “she” and a board with mixed gender actions that can help you with assessment of their mastery.

You can use the same he/she game boards for addressing “I.” Simply print the game board that matches the gender of the child and adhere or digitally add a photo of the child in the “start” area. (Instructions included in game board packet.)

Once “he,” “she” and “I” are in place, I’ll begin working on “they.”  Again, I go back to hands on activities and eventually move to picture prompts. (A squad of superheroes comes in handy here.)

I’ve provided a game board for this target as well. To target “we,” you can either print and adhere a photo of the child with a friend or two at “start” or take the steps to add a digital photo.

While I’m working on pronouns, I will continuously model the correct verb tense and auxiliary verbs, but I don’t insist on this from my little ones. We work in small, mastered steps, so if they say “he running,” I simply say “He is running” and move on.

A word about singular “they.”

I am all about respecting the choice of a person’s own pronouns, so if a child prefers “they,” we focus on that. I’m much less about which you choose– he, she or they — and more about whether we’re using a subjective or objective form correctly. My Pronoun Mini-books (pictured below) include the singular “they” form.

The FREE game boards are located under the Free Resources tab at the top of the page (or click here). Not a subscriber? Join now!

Looking for more pronoun resources? Try Pronoun Mini-readers for He, She, and They. 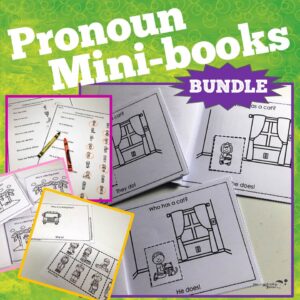 Do you find yourself working on pronouns frequently? Let us know your favorite hands on activity below!

Come talk to me! From a toddler or preschooler saying their first word toddlers to elementary-aged children using language to play and make friends, there is such magic to communication that I never get enough of it! Over 20 years of experience and training has brought me to the top of my field, and ready to share *all* of the tips and tricks I learned along the way!
All Posts »
PrevPreviousCreativity for SLPs
NextWrite a Guest Post for Activity TailorNext

It makes sense that little ones will most easily a

Language is made up of words, but a word can “lo

Two words I LOVE to hear children say (even if par

If you’re worried about a late talker, you proba

Is there anything more frustrating than hearing a