I arrived at ASHA with my schedule more or less organized.  There were a few sessions that conflicted with one another and I was going to need to make a final selection, but a few I was going to be at no matter what.  The one at the top of the list was Efficacy of the SATPAC Approach for Remediating Persistent /s/ Errors.  It was as game changing as I could have hoped.

Satpack is designed to move kids through therapy quicker (while homework is a must, contact time with the therapist is kept to a minimum, often 10-15 min/week) and assist carry-over since you are immediately working with normal rate and prosody and you move to sentence level work so quickly.

The focus is on nonsense words, a recommendation that came up in several sessions, since they don’t have previously learned error patterns associated with them.  It also focuses on very high trials/session—200-500 depending on the length of session time (and, yes, 200 for a 10-15 min session is possible!).

The presenter and creator, Stephen Sacks, had an hour to take us through the program and his explanations and video made compelling arguments for the protocol.  You begin with the establishment phase—not a whole lot different than what we typically do in articulation therapy.  Basically, you are getting the kiddo to produce the phoneme (or a close approximation) in isolation.

The focus was “s” and he offered a number of tips for eliciting the correct position (starting with an EEE, using /t/ and tongue “popping”).  If you need more specifics on this, check out Pam Marshalla’s awesome book on Frontal Lisp, Lateral Lisp which will give you great detail or go to the handouts from the ASHA convention for a quick overview from the SATPAC session.  There are then seven steps to the establishment phase.

Using a nonsense word with a facilitative context, for /s/ it is often “beetseet,” you move from slow repetition of the word and giving feedback, to varying the stress within the word and using the nonsense word in phrases/short sentences with varied stress.  For example, “A boy bought a new beetseet.”  “A boy bought a new beetseet.”  Facilitative context means that the initial sound keeps the tongue neutral, the “ee” aids in lip positioning; the “t” encourages the back of the tongue to meet the back molars and place the tip “up,” and the final “ee” aids in maintaining the correct position through the target sound.

Think you could come up with your own words?  That’s the wonder of having the program suss out the appropriate context for you whether you’re working on /s/, /r/, /l/ or whatever.

Once you have accomplished 95% accuracy at each level, you move to the practice phase and strive for an 80%+ accuracy with a near normal speech rate (140 beats per minute using a metronome—Though this is considered a slow conversation rate, I’m in the south and is probably the norm!)  There is a metronome if you use the program on the computer.  I only have access to an iPad in therapy so I downloaded a free metronome.  Sometimes it makes me feel a bit crazed! 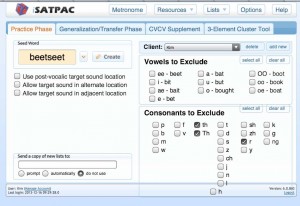 The practice phase is the most exciting.  SATPAC allows you to enter the child’s name and generate lists specific to that child.  So, for our example, I’ve entered myself as a student with a list, also struggling with both “th” sounds as well as “r.”  I enter that in and have SATPAC make 5 practice lists specific to my abilities. 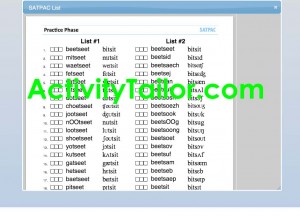 Lists 1-4 are single nonsense words with various consonant and vowel changes.  List 5 contains sentences with one nonsense target word.  The clinician asks questions (given to you) and the student answers with the same sentence each time, but varying the stress. 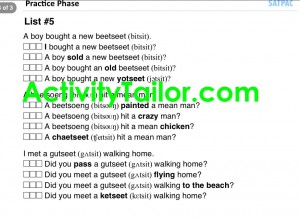 Next you move on to the generalization/transfer phase which again gives you the opportunity to print out tailored lists for students at the phrase, short sentence and sentence level. 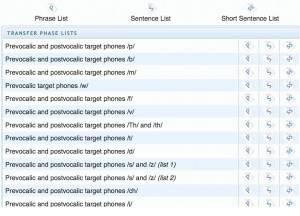 I’ve been using the program now for a few weeks and I’m noticing much faster improvement than I frequently see.  I’ll admit it’s taken me longer to get the hang of it than I expected.  I sometimes feel like I’m flipping back and forth between my notes and the lists (or “winging” the pronunciation of the nonsense words) but I’m improving every day and the effort is WELL worth it!  I would suggest immediately starting with the free CEU section of his website to be sure you have a good handle on both the idea behind the program and the implementation of it. 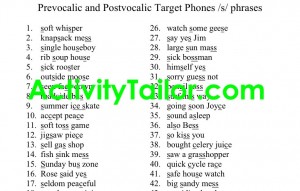 For me, the program has the most utility with elementary aged students and ideally with decent language skills.  I’ve been trying the lists with some younger students (4-5 years) and a few with language issues and while the imitation of single words is fine, they’ve been completely baffled by the tasks requiring them to change the meaning of the sentence by changing the stress on the words.

I’ve sent home a couple lists and while I haven’t had a parent call to say “what?!” I have had to do a bit more education (why we are using “fake” words) and cheerleading (“You can do it!  Don’t sweat whether or not you have the vowels quite right!”).  The additional practice might not be the best fit for all families, but you could easily have a teacher, aide or carefully selected buddy run through the lists since they are so quick to do.

The program also contains list generating abilities for kiddos with apraxia that move through a hierarchy allowing reduplication, reduplication of just the consonant (varied vowel), reduplication of vowel (varied consonants) or varying both consonant and vowel.  Again, you have the option to remove and sound—vowel OR consonant—that the child doesn’t yet have in their repertoire.  I haven’t had the need for this yet, but it’s something that has come up for me in the past and I’m looking forward to adding this to my arsenal when it crops up again!

You can take a look at the program here.  (***Disclosure:  I received a free copy of the program, but all opinions expressed in this review are my own.***)

In the meantime, do you use nonsense words regularly in therapy?  There seems to be opposing camps—some that suggest focus on high frequency words is a must and other promoting nonsense words.  To me, it makes most sense to start with nonsense words when you can’t easily get an accurate production in “real” words and move to high frequency words once you have a prayer for success. For instance, /s/ and /r/ seem to be biggies for starting out at zero, or what seems to be below zero.   Anyone else have an opinion?

Come talk to me! From a toddler or preschooler saying their first word toddlers to elementary-aged children using language to play and make friends, there is such magic to communication that I never get enough of it! Over 20 years of experience and training has brought me to the top of my field, and ready to share *all* of the tips and tricks I learned along the way!
All Posts »
PrevPreviousHandling the Holidays with ASD
NextUnwrap the Gifts FREEBIE!Next