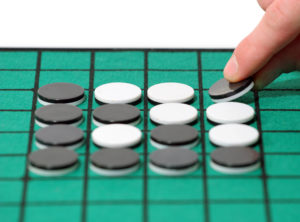 I love board games and Othello

is one of those classic, perfect two player games.  Do you remember this one?  The board consists of 64 green felted squares and each player has 32 thick black and white disks that clack snugly into a space on each turn.  The tactile aspect is hugely satisfying, in addition to encouraging fine motor skills.

On your turn, place a disk on the board trying to “capture” at least one disk of the other color between a previously placed disk and your newly placed one.  Here’s the fun part!  You turn over each disk to “your” color that falls between “your “ two ends, whether it be horizontal, vertical or diagonal.  “A minute to learn, but a lifetime to master” is Mattel’s slogan, and it’s true.  The game involves a great deal of strategy and is fun for both children and adults.  Somewhere around 8 years old/3rd grade is where this game tends to gain popularity. 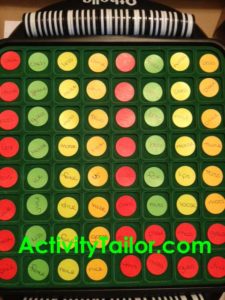 Now, let’s tailor it!  I buy boxes of plain circle stickers at office supply stores.  They fit perfectly inside the little squares and the felt allows them to stick but not fully adhere (so you can switch the stickers easily with no residue).  On 64 circles, I write the child(s) target words and place one in each square.  We then begin to play the game, saying the words we cover as well as those we uncover when we flip the disks.  This is a very fun way to get a lot of trials!

I like to provide auditory stimulation, so I usually say my “own” words, but it would be easy enough to place all the production burden on the child.  And the game easily adapts to carrier phrases “I cover (target word)”, “I see (target word)”, “I said (target word)”, depending on what sound you need to in/exclude from the phrase.

P.S. The rows of disks have a very Oreo cookie look to them.  I think a cookie or two in conjunction with the game could be a very therapeutic experience.

If you like this idea, but don’t have the time to DIY, you can check out my ready made version here. 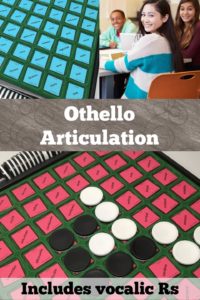 This school year is a little nuts! 🥜 This book

Our farm animals love to hide and jump in silky le

Narrating is simply describing what is happening.

Play with your food! Cooking doesn’t have to inv

My wanderlust is off the charts. If money (or covi