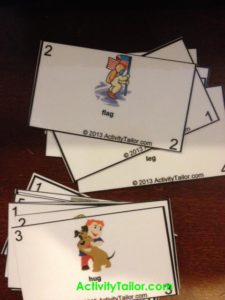 I always felt slightly chagrined when I’d pull out a game and tell the kids, “OK, on each turn you also need to say one of your words” and we would either work down a list or have a stack of flash cards nearby. The kiddos would look at me with such suspicion.  As if to say, “You’re fooling no one, lady.”  But the thing is we need to get through the trials, and it can be boring and we should all be delighted we get to play anything while we’re at it. 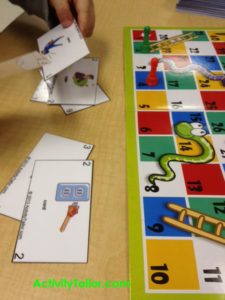 That said, I found a way to combine both an artic deck and the spinner/dice (sort of a chocolate/peanut butter moment).  Tuck away the dice or spinner from any game and use these cards instead! Each card has a number value of 1-6 shown in two corners and a target specific word with graphic in the middle. Simply make multiple copies of each card, laminate and cut. Then place a deck face down in front of each player (and each player can have their own target specific deck if needed) and draw a card instead of rolling the die. It’s a great way to incorporate classic board games like Chutes and Ladders

into your therapy room or use the decks with generic game boards. 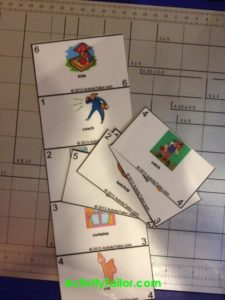 Graphics are dynamic so kids can easily generate novel sentences. I’m tired of “I see a snake.  I see a cat.” So I chose pictures that will encourage, “The woman is holding a snake” or “The cat is drinking a bowl of milk.”  There is action, not just a pictured object.

There are two deck choices:

Initial (20 each), medial (10 each) and final (20 each) positions are represented.  Six blank cards are included in each deck for custom targets.