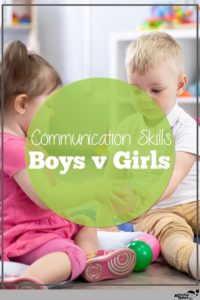 Have you ever walked into a preschool classroom and had a little girl walk up to you and start chatting in a way that seems well beyond her years? Certainly, way beyond the skills of your own little one?

This precocious behavior is both adorable and a bit disconcerting. Is it normal?

The average age for a first word is 7-12 mos. and girls are more likely than boys to fall on the earlier side.

At 16 mos. girls are likely to have vocabularies that are more than 2x the size of their male peers with an average of 95 words vs. 25. The ability to combine words, which we expect to develop by 2 years, also tends to show up, on average, 3 mos. earlier in girls than boys. (There seems to be a “critical threshold” of vocabulary size needed before word combinations begin, so it makes sense that if girls are acquiring larger vocabularies more quickly, it would result in meeting the next milestone faster too.)

Boys should still fall in the average range.

Where Grandma might not have it quite right is when it comes to boys’ development. Yes, the girls are often ahead when it comes to meeting speech and language milestones, but boys should still be falling into the average range.

Regardless of gender, we still expect:

And there isn’t anything to suggest the boys lag in communication skills by the time they reach elementary school age. (Despite what it might feel like in real life.)

However, boys are at greater risk for some ongoing communication disorders, particularly autism which affects boys at a rate nearly 4-5x the incidence of girls. Several early language skills that tend to lag slightly in boys—eye contact, gestures and joint attention/referencing—are typically deficient in children with autism. Ignoring these possible early signs in the hopes that “they’ll outgrow it” is not recommended, especially since early intervention is one of the greatest indicators of improvement.

Stuttering and apraxia are two other communication disorders that are more prevalent in boys than girls.

I have a son and a daughter, and my son is the more talkative of the two, so remember the research reports generalizations! Let me know in the comments below if you have a chatty boy in your life.