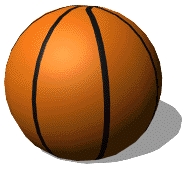 North Carolinians take college basketball very seriously and March Madness is the culmination of all craziness.  This year’s tournament starts on March 19 and lasts through the first week of April and everyone knows the games are even more fun to watch if you have your bracket filled out.

A lot of thought goes into these brackets.  Does this team look like it’s starting to peak, really come together?  Who will be out with an injury?  Which team seems to always choke under pressure or always rise to the occasion?  In a pinch, who has the better mascot?

No matter how you fill it out, or whether or not you watch any games, using a bracket is a fun way to track progress and even work on some statistics along the way. 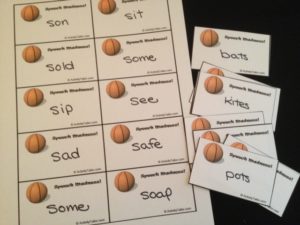 This bracket starts with the Elite Eight.  Decide how many trials you want per team.  Five would be logical since that’s how many are on the court/team during a basketball game, but ten is fine too.  You will need a set of Speech Madness cards to represent each team (5×8=40 cards or 10×8=80 cards).  Trials might include articulation words, math facts, spelling words, really anything that requires some drill practice.

Depending on your child’s goals you might find natural “team” breaks.  For instance, a child working on /r/ carryover might have a final /or/ team, medial /ire/ team, final /er/ team, etc.  If you decided to help your own kids with math facts, you might have a team of 3 times tables, another of 7 times tables, 6 times tables, etc.  If their skill level or goals don’t have natural breaks, no big deal.  Just create teams with words/questions/facts at random. 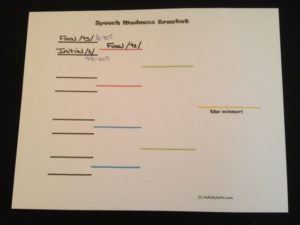 Name each “team” then pick two teams to go up against each other and write each one on the first set of black lines.  Go through all the cards on one team and place the score as a percentage next to it.  Now go through the other set and put down that team’s percent correct.  Who was the winner?  That team moves on to the “Final Four” and their name is written on the adjacent red line.

Time for the “Final Four!”  Continue play as you have been, this time whittling the teams down to a Championship game and then crowning a tournament winner.

Want to shake things up?  What if each “Final Four” team had an injured player?  Pull one card at random from each of those teams and insert a sub from the deck of a losing team.  (This is particularly helpful if you need additional practice with a fact that got knocked out.)

This game is particularly good way to help kids identify their strengths.  And, sticking with the sports analogy, you can have them go back and work with the teams that didn’t go on.  Who knows, next time they might end up with a Cinderella story!

Bracket sheet and basketball themed cards are available as  Speech Madness FREEBIE in my TpT store.  Please follow me while you’re there!  And don’t forget, my sale on Artic Attack and other R games ends tonight!

Come talk to me! From a toddler or preschooler saying their first word toddlers to elementary-aged children using language to play and make friends, there is such magic to communication that I never get enough of it! Over 20 years of experience and training has brought me to the top of my field, and ready to share *all* of the tips and tricks I learned along the way!
All Posts »
PrevPreviousSpring is in the “Air”
NextJoy and PainNext