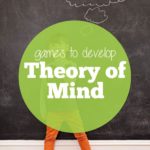 Have you ever picked up a student and had them launch into the middle of a story, usually a movie or show they’ve watched, but you can’t follow it because you have no frame of reference?

Theory of mind is the understanding of another person’s perspective, emotions, knowledge or beliefs and that they may not match your own.  This includes the ability to recognize that our experience gives us unique information and we need to accommodate this difference in our communication. Sometimes this means filling in information a listener doesn’t have, for instance, filling in a friend who was out sick on what happened on the day they were absent. Sometimes it means skipping a re-cap when you both watched the latest episode (separately or together) and want to dish on the action.

These skills allow us to be effective social communicators, but also play a role in keeping confidences—an expected ability in a close relationship—and conflict resolution. It also allows us to play jokes/pranks on others. We expect children to have some competency with this by 4-5 years of age.

I Know Something You Don’t Know (Yet)

Games that rely on a “secret” are ones that help develop this understanding and are easy to incorporate into your session even if just for a short portion of time.

Other advanced games like charades and Pictionary rely on one person or team working to identify information another person has. If you allow the students to come up with the possible “answers” on their own, it provides an additional opportunity to consider another person’s perspective. Will all of your friends be familiar enough with an obscure dinosaur or cartoon character to guess it?